Sure, getting sweaty will keep you slender—but it’ll also help prevent osteoporosis, fatigue, cancer, and more! 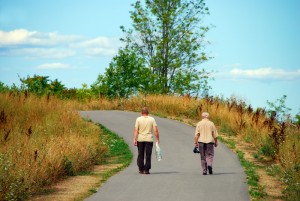 More than 3.5 million skin cancers in over 2 million people are diagnosed annually.  But pairing exercise with a habit you may already have—consuming coffee or other caffeinated drinks—may reduce your risk of developing squamous cell carcinoma, one of the most widespread types. In a recent Rutgers University study, mice that that were given caffeine and ran on a running wheel had 62% fewer skin tumors than the rodents who neither exercised nor consumed caffeine. Exercise alone reduced tumor incidence by 35%, but the combination of caffeine and exercise seems to be more effective in removal of sunlight-caused DNA damaged cells than exercise or caffeine independently, says Yao-Ping Lu, PhD, associate research professor of chemical biology and director of skin cancer prevention at the Rutgers Ernest Mario School of Pharmacy in Piscataway, NJ.

About 10 million Americans suffer from osteoporosis and another 18 million have low bone mass. There’s no cure, but researchers at the Medical College of Georgia found that study participants who exercised regularly were able to maintain greater bone density. “Exercising for at least 30 to 45 minutes daily can help to reduce bone loss,” says Reneé Balconi, fitness expert and founder of Balconi Top Traning. “Physical activity causes the muscles and tendons to pull on the bone, which triggers cells to create more bone.”

We’ve all had days where we race home from work just to collapse in front of the television. It turns out that getting your rear in gear may be the best way to put a little pep in your step. Introducing low-intensity exercise into your life could boost your energy by 20 percent and decrease fatigue by 65 percent, according to a new study from the University of Georgia. “If you are tired, you’ll want to begin by exercising three times per week and then increase it to five days,” says Balconi. “Start out with a 15-minute walk in the morning and then another for 15 minutes after dinner.” Acid Reflux

If you frequently find yourself fussing over a burning sensation in the back of your throat or chest, don’t ignore it—you may have gastroesophageal reflux disease (GERD, or simply acid reflux), which can increase your risk for esophageal cancer. Luckily, exercise helps alleviate symptoms. In a 2004 study, people who worked out just 30 minutes a week reduced their risk of reflux by half.

For 36 million Americans, migraines can be debilitating, from the dreadful pounding in the head to the sensitivity to light to the nausea. And in some cases, the side effects of the medication to treat and prevent migraines are arguably even worse—they include suicidal thoughts, fatigue, and dizziness. A recent study from the University of Gothenburg in Sweden found that exercise may be a viable alternative to popping pills. People who rode a bike three times a week for 40 minutes improved symptoms the same amount as those who took meds.

Moderate to intense exercise has been shown to reduce incidences of silent strokes—small brain legions that can lead to changes in cognition and mobility, says Joshua Willey, MD, assistant professor of neurology at Columbia University. In a recent study, Willey found that people who engaged in activities such as bicycling, jogging, swimming, or racquetball were 40 percent less likely to experience a silent stroke. “Exercise helps to control weight, blood sugar levels, and inflammation, which are all important in preventing silent strokes,” says Willey.

“Most people suffering from depression feel better after working out,” says Jasper Smits, PhD, associate professor at the University of Texas at Austin and coauthor of Exercise for Mood and Anxiety. A sweat session can help someone struggling with depression become more social. For those who experience panic attacks, exercise helps to desensitize them from symptoms such as heavy breathing because they’re experiencing the warning signs in a controlled environment.

It’s a given that diet and physical activity are vital in managing both types of diabetes. In fact, it may help prevent type 2. “Recent studies show that both strength and aerobic training improve insulin resistance and reduce abdominal fat,” says Samantha Heller, RD, CDN, Clinical Nutrition Coordinator at the Cancer Care Center at Griffin Hospital in Derby, CT. People who have diabetes need to keep a close eye on their blood sugar levels before, during and after exercise and preferably work with Arthritis

Swelling, reduced mobility, and stiffness in the joints are all symptoms of the cartilage breakdown know as arthritis. And although there are many meds on the market that can help reduce the pain, a healthy dose of exercise is also a way to reduce symptoms. “Exercise in small, frequent doses is a fantastic weapon to combat chronic pain associated with arthritis,” says Amy Dixon, exercise physiologist (more of her title tk). Lack of physical activity not only leads to weight gain, which can add more pressure to the joints, but it can also increase inflammation in the body. “Once your doctor gives you the OK to exercise, I would suggest starting slowly,” says Dixon. “Great low-impact choices would include swimming, cycling, and the elliptical trainer.”